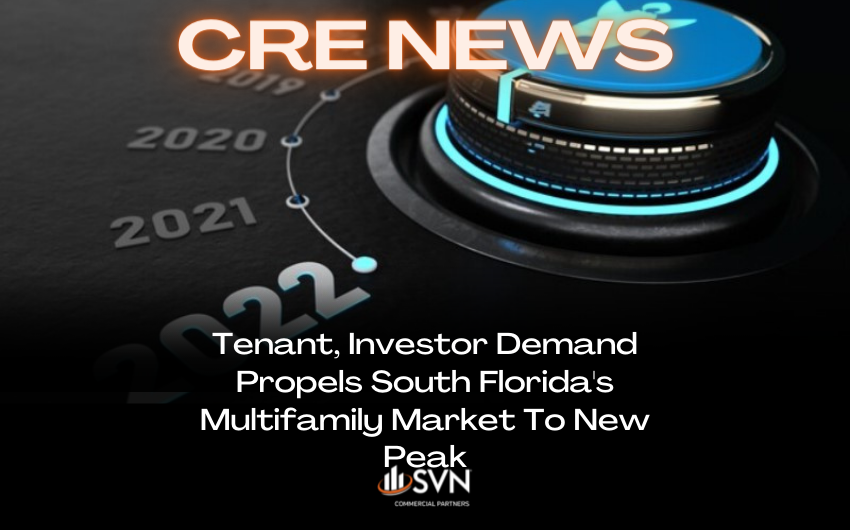 Miami’s multifamily market slowed down dramatically at the start of COVID-19 and now has quickly rebounded to record levels.

Collections and occupancies are excellent, new supply is quickly absorbed, population/household growth is on fire, the job market has largely rebounded, wages are up, home prices are at record levels — meaning more people are renting — and limited land is keeping construction in balance.

Demand for rentals was strong pre-pandemic and will grow even greater in the post COVID-19 era as South Florida continues to increase its resident count. Between 2020 and 2021, South Florida added 42,842 residents, including 14,318 new residents in Miami-Dade County. With the influx of residents, South Florida is expected to have over 37,000 new households created each year over the next five years.

That represents over 14,800 new renters per year, assuming 60 percent of households enter homeownership and 40 percent rent, which is in line with historical ratios.

Record year for sales
2021 was a record-setting year for the South Florida multifamily market. The region experienced 603 multifamily sales totaling $11.4 billion, which is more than double the annual record of $5.5 billion set in 2016.

Sales were evenly distributed across South Florida as Miami-Dade County recorded 35 percent of total sales volume while Broward County came in at 38 percent and Palm Beach at 27 percent. The types of deals across the region, however, varied.

Fundamentals improve
Effective rents in 2021 increased by 19.7 percent in Miami-Dade County, with the average rental rate sitting at $1,997 per month. The Coral Gables submarket within Miami-Dade is among a handful of areas in South Florida with rents that surpassed the average at over $2,500 per unit.

The exceptionally strong rental prices across South Florida are supported by rental demand due to continued population growth, the single-family housing pricing surge, snapback in rent growth from a static 2020 and almost 20,000 units in net absorption.

Low vacancy in the region is largely due to there being 19,136 net units absorbed in South Florida in 2021 and only 7,362 new units delivered for the same time period. While positive net absorption fueled by strong rental demand has created limited rental supply, there are 17,893 units scheduled for delivery in 2022, which is needed to keep pace with demand.

Over the past five years, 34,499 units have been built, which comes out to an average of 8,625 units annually. For the same period, net absorption in South Florida averaged 10,101 units per year.

In short, this means rental demand and supply remain in balance, albeit last year net absorption was almost triple the new supply added to the market. It’s important to keep in mind that as new units continue to be built and absorbed within the market, vacancies will remain limited.

That last statement is especially true when looking at South Florida’s population growth, which has increased by 135,130 over the past five years. Given 34,499 new apartment units were built, this means one unit has been built for every 3.9 net new people coming to the region.

Because South Florida is expected to see a positive net migration of 323,062 people (which is higher than last year’s projections), the region would need over 82,000 new rentals to keep pace with population growth for the next five years.

What’s in store for 2022?
COVID-19 has changed how people live, work and invest, and the South Florida multifamily market has experienced this first-hand.

In 2022, more individuals, companies and investors will continue migrating to South Florida to take part of the region’s business-friendly environment, year-round climate, lifestyle and existing and new infrastructure.

— By Calum Weaver, Executive Managing Director of Cushman & Wakefield. This article was originally published in the May 2022 issue of Southeast Real Estate Business.