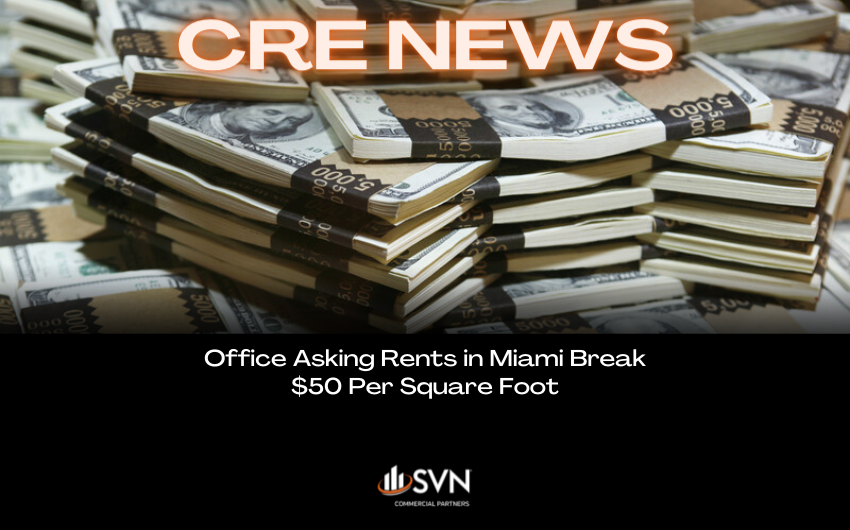 The average asking rent for Miami office space has risen above $50 per square foot for the first time in the city’s history, according to a new report from JLL.

Brickell came out ahead of all other sections of Miami, with average asking rents rising 42 percent annually in the second quarter, to $82.71 per square foot. (The average overall reached $51.12 a foot.)

Driving the increase in rents was Miami’s Central Business District—which includes Downtown Miami, Wynwood and Brickell—which clocked an average asking rent of $64.02 and a 17.3 percent vacancy rate in the second quarter, according to JLL.

In particular, the asking rents were pumped up by the 830 Brickell office tower, where rates ranged from $125 to $150 per square foot, a $25 increase from the first quarter of 2022, per the JLL report. Other landlords in Brickell took a cue from 830 Brickell and hiked their asking rents by $5 to $15 as well.

The office tower, which is nearing completion, has attracted the likes of Marsh, the insurance arm of Marsh & McLennan Companies which inked a 25,000-square-foot lease in April. The tower also made the shortlist for financial giant Citadel in its search for an office in Miami, after it decided to relocate from Chicago.

Other leases JLL attributed to vacancies tightening and asking rents rising were PricewaterhouseCoopers’ 39,000-square-foot lease at 545Wyn and Mindspace’s 30,000-square-foot deal at The Gateway at Wynwood.

The jump in asking rents comes despite fairly high vacancy in some areas of Miami. Wynwood’s office market notched a 32.4 percent vacancy rate, though JLL predicts vacancy in the district will fall below 15 percent in the next six to nine months.

“The vacancy rate in Wynwood is expected to drop to those levels from 32 percent now because PwC and Mindspace, along with a handful of other companies, would have moved into their spaces by then, which is when JLL would then consider a space ‘occupied’ and no longer ‘vacant,’” JLL Research said in a statement. “Once the tenants move in, vacancy will decrease.”

A recent report from Colliers, for comparison, found that the second quarter of 2022 saw a vacancy rate in Miami’s office market that has remained fairly static over the past year, with tenants taking advantage of new developments and keeping the vacancy rate right around 11 percent in Miami-Dade County overall.

And with offices, comes a demand for housing.

ROVR Development, for example, has been making headway on three projects in downtown that could produce over 1,800 units of housing, Commercial Observer previously reported.