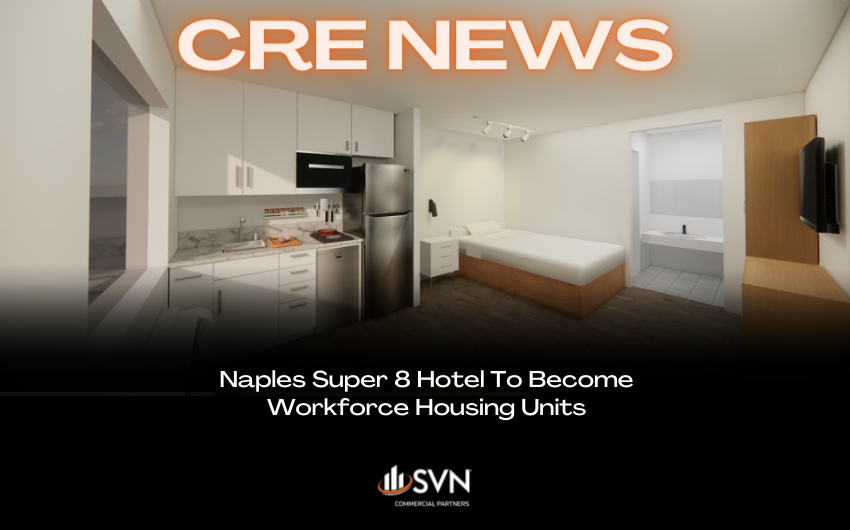 Residential units for essential workers will replace the former Super 8 hotel in Naples adjacent to the Collier Boulevard and I-75 interchange. The 104-room hotel will be converted into more than 100 workforce dignified units in this first-of-its-kind project in Collier County.

The developer behind the project, K2 Developers, has the mission of providing workforce housing communities around the country. K2 co-founders Dan Kessler and Andrew Korge acquire motels and hotels and convert the rooms into residential units within months, a much quicker process compared to ground-up construction that could take years.

K2’s projects, with its first development in Steamboat Springs, Colorado, are aimed directly to assist essential workers who live in a ski, sand or entertainment market with an unbalanced supply and demand for workforce housing. The developers use data-driven research to decide which locations are in most distress due to lack of dignified rental units.

“We provide more akin to market-rate type of housing, just for local essential workers,” Korge said. “And we’re providing it directly to companies, which helps them give a competitive hiring advantage to get the right staff.”

Moorings Park and NCH have been announced as stakeholders in this project, both companies will have rooms set aside for their workers on a first-come, first-served basis.

Continuing care retirement community Moorings Park has been involved in workforce housing issues for many years. When CEO Dan Lavender learned about K2’s goals for Collier County, he jumped at the opportunity to be involved as an investor in the project.

“We’ve been talking to a lot of developers about what can be done in this regard, and we really liked this specific one because it can deliver workforce housing fairly quickly,” Lavender said.

Hyperlocal collaboration with local organizations is an essential part of K2’s development projects.

“We’re not just some developers who come and have an idea and just try to execute independently,” Kessler said. “Everything we do is for the community, and we want to do it with the community.”

Not only is K2 concerned with providing essential workers with housing, but they want to ensure their residents feel that they are part of a community.

“It’s not just ‘Hey, here’s your apartment, it’s a little bit cheaper than the next guy,’” Korge said. “It’s ‘Here’s a good apartment, dignified quality, and you’re going to have programs and activities and things to do outside of the year.’”

The K2 team hopes this unique approach to providing residences will inspire surrounding developers to join them to combat the housing crisis that’s plaguing Collier County.

“We believe we’re leaders in this space charting new terrain and if other developers look at what we’re doing I think they’re going to agree with that,” Kessler said. “If they choose to go down the same path, we’ll be there every step of the way, encouraging them to do so. The reality is that this project, while it’s a one-of-a-kind at the moment, is just going to make a small dent even with 100 units in what’s needed in Collier County.”

K2 needs to go through the process of zoning changes for the development with the county and foresees the project being finished in the next 12 to 18 months.