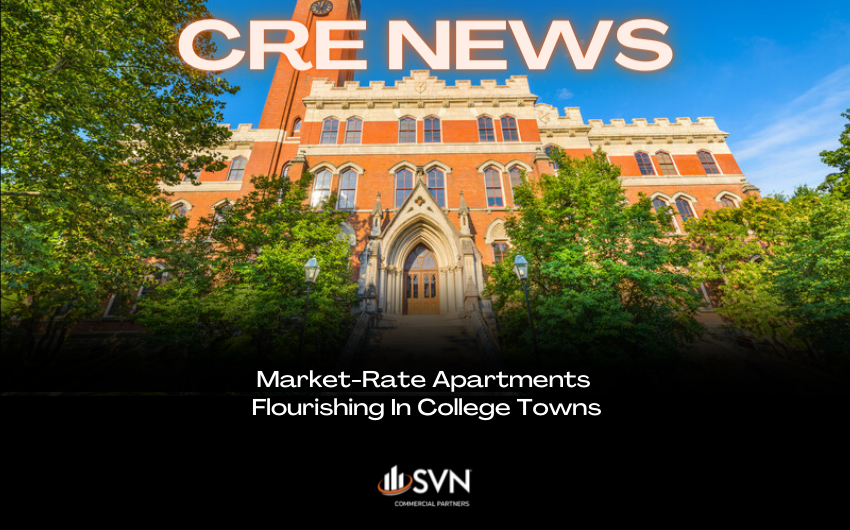 Apartment investors would be smart to look to college towns for strong, consistent returns, according to Greg Willett, at Institutional Property Advisors.

There’s nothing small about the small-market size in which most are located.

Knoxville, Tenn., home of the University of Tennessee, recently overtook Ann Arbor, Mich., and its University of Michigan as the best-performing area for conventional market-rate apartments.

College towns have unique advantages such as stronger economies created by stable working environments. Also, some graduates choose to stay in the towns where they attended college, yielding a better educated general workforce and typically a larger concentration of higher-paying industries.

When these towns also include regional health care centers, they flourish, even more, fitting the “Eds and Feds” specialty.

Toss in the wide range of cultural events, typically created by the universities, and they are desirable places to live, Willett said.

“At not-quite 900,000 people, metro Knoxville is just the right size for households seeking that compromise between a big city and a really rural environment,” he said.

In Knoxville, vacancy is limited to 1.4 percent, and rents are rising at an annual pace of 23 percent to reach nearly $1,300 per month.

Ongoing conventional apartment construction in Knoxville totals 1,600 units, representing 3.1 percent near-term inventory growth for the existing base of 52,300 units, IPA reported, and no additions are occurring this year to the off-campus purpose-built student housing stock that totals 10,300 beds.

“The Knoxville apartment market has been a quiet outperformer for a while now, and accelerated in-migration is boosting that premium. The Carolinas and Tennessee combine to match Florida and Texas for household relocations over the past couple of years, and a healthy portion of that growth has gone to eastern Tennessee’s small markets like Knoxville, Chattanooga and Johnson City.”

Here, the vacancy rate for the 38,200 conventional apartments found in the metro as of June was limited to 2.1 percent, under the already low long-term norm of just over 3 percent. Rents that average a little more than $1,400 per month are up 15 percent year-over-year.

“Historically, typical annual rent growth is lower, but the figure is still quite healthy at roughly 4 percent,” Willett said.

Ongoing conventional apartment construction in Ann Arbor is limited to some 600 units. Additionally, off-campus student housing deliveries will total about 1,100 beds this year.

“While that’s an unusually big block of student housing, there’s been a shortage of off-campus student beds in the past,” he said. “About six student prospects exist for every bed of purpose-built student housing product. Apartment sales prices in Ann Arbor run at roughly $235,000 per unit, relatively high for a Midwest location.

Brandt Stiles, Principal of Development at Subtext, tells GlobeSt.com that he is bullish on many small college markets and Subtext has developments completed or underway in Ann Arbor, Eugene, Knoxville and Boise.

“What attracted us to these markets is the fundamentals – university enrollment growth, absorption and historical rate growth – which are strong along key dimensions,” Stiles said.

“The biggest challenge we are seeing as a developer in college towns, whether it be multifamily or purpose-built student housing, is getting projects to be feasible given headwinds with rising construction costs, rising interest rates and demand for qualified and talented subcontractors.

“Profit margins are slimmer, which gives us no choice but to get more creative at all phases of a project. We are solely focused on ground-up developments because we believe we add the most value with new construction, but there are some great opportunities in the value-add and redevelopment space.”

“Many graduate students prefer housing away from the younger undergraduate crowd given their heavy workload and more professional work schedule,” Lybik said. “Additionally, visiting professors help boost rental demand also given that they are not putting down roots in that community.”

Remote Workers Return to ‘Their’ Campus

“Because of the increasing adaptation of remote work, remote workers can choose to return to their college towns and work remotely from there or even to retire to their college communities,” Houck said. “Universities want to have commercial real estate investment in their cities because it not only attracts students, but it helps attract and retain faculty in a very competitive world.

“Major research universities are also investing in innovation communities, and there are some great examples of cities that are being turbo-charged by universities, and it’s not just Boston – the epicenter of higher education.”

He said one great example is Durham, N.C., which has converted to becoming a former tobacco factory town into a thriving university and life sciences epicenter thanks in large part to Duke University.

Creating a Pipeline of Young Professionals

JLL Executive Vice President, Public Institutions, Lindsay Stowell, tells GlobeSt.com, “Universities want to attract students, faculty, and staff, and, from a real estate perspective, can do so by providing an attractive built environment within the campus but also by having access to a flourishing town that provides amenities for students, professionals, and families.

“Cities want to bolster economic activity and attract and retain residents, and the university provides this temporarily with students and permanently with its employees.

“Turning students into a pipeline of future young professionals who choose to remain in the town can be the larger goal for college towns, and this is where investment and collaboration come into play.

“Not only does the town need the real estate amenities such as housing, retail, and entertainment, but it needs employers to establish a presence to recruit students. The university can help with this through engagement, research collaboration, and providing a pipeline of smart, motivated employees.”

“Why do students choose one college over another? Many times, the decision comes down to how the students feel about safety, aesthetics of buildings, proximity to stores and restaurants and how transportation or parking work together.

“College students and, many times, their parents, need to be viewed as consumers, so what do the consumers expect for the money they are paying? The money isn’t just going to the college, but that money trickles down to all the business around campus.”