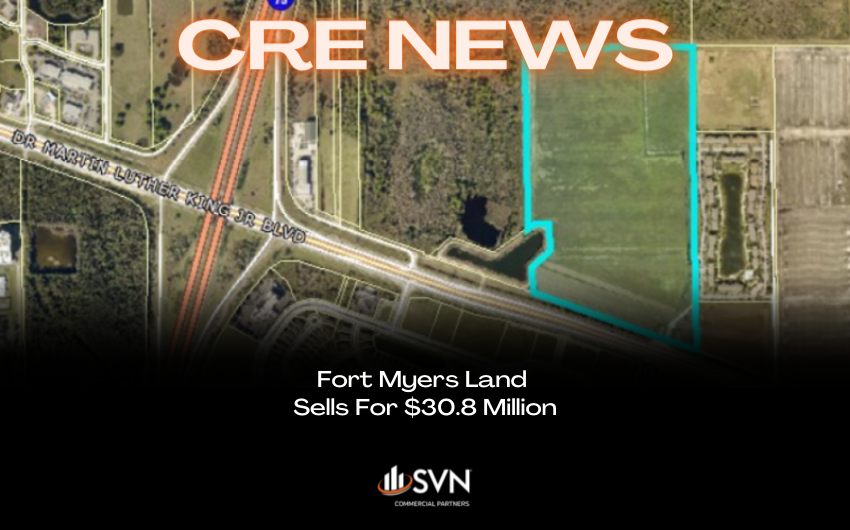 Certain pockets of Southwest Florida seem to be immune from any national economic downturn trends, including the Interstate 75 and State Road 82 corridor in Fort Myers.

A 64-acre parcel just east of I-75 and on the north side of SR 82 sold for $30.8 million. The property is flanked to the east by the Lexington Palms apartment complex and a planned warehouse and distribution facility currently known as Project Rainforest.

Varden Capital Properties, based in Atlanta and led by president and CEO Trace McCreary, closed on the land Thursday from the Huether family, which owned it under the C-Hack LLC corporate name since 2003 when it purchased it for $2.2 million.

Varden Capital Properties has been developing apartment complexes since 2011 and it paid an average of $481,484 per acre for the Fort Myers parcel. Varden and McCreary could not be reached for comment to discuss their plans for the land.

Of the 19 new construction projects listed on Varden’s website, 14 of them were apartment complexes in the southeastern U.S.; three were classified as redevelopment/adaptive use projects, including a high-rise apartment building, an office tower and a renovated historic apartment complex in Mobile, Alabama. Another was medical-related in Mobile, while one was industrial in Norcross, Georgia.

Matt Simmons, a property appraiser with Maxwell, Hendry & Simmons appraisal firm in Fort Myers, said he would be surprised if the price did not include all of the required land entitlements necessary to hit the ground running and build soon.

“What I can tell you about that property is there’s a ton of soft costs that have been put into that property over the years,” Simmons said. “Planning. Essentially securing the rights to be able to develop that property with healthy residential and commercial uses. That property also, I’m almost certain, has a certain amount of impact-fee credits.

“The Huethers own quite a bit of land around there. There’s really healthy entitlements that were secured on that property. If you loaded up that piece with the entitlements, you could work it out to where that number ($30.8 million) makes sense. But I don’t have direct knowledge of that transaction to know what entitlements went with it.”

The Huether family could not be reached for comment.

Varden Capital owns 34 properties that combine for 7,684 apartment units spread across the Southeast, according to its website. The company sold more than 50 properties combining for more than 10,000 units over the past decade.

This marks just the latest in a number of land deals that are within a mile of the address at 9901 State Road 82, where Forum Boulevard dead ends into that address.

There’s about four million square feet of industrial-related construction projects planned for that corridor, Simmons said. The only part of Southwest Florida that rivals this volume of industrial construction is the Alico Road/I-75 corridor to the south.

“The 75 and State Road 82 corridor, it is shocking how much is going on in and around that corridor right now,” Simmons said. “People don’t realize what all is in place.”

Suncoast Beverage is looking to build a 400,000-square-foot distribution facility.

Suncoast Commerce Center is building more warehouse space near I-75 and Luckett Road.

Project Rainforest, the preliminary name for what could become an Amazon distribution facility, remains in permitting phase with Fort Myers.

Alessio Holdings has cleared land at the southwest quadrant of I-75 and SR 82 to build industrial as well.

“You’ve just got a ton of stuff happening there,” Simmons said. “That whole 75 and 82 corridor is really the last piece of infill in Fort Myers where you can do things to scale. That area is really just transforming.”