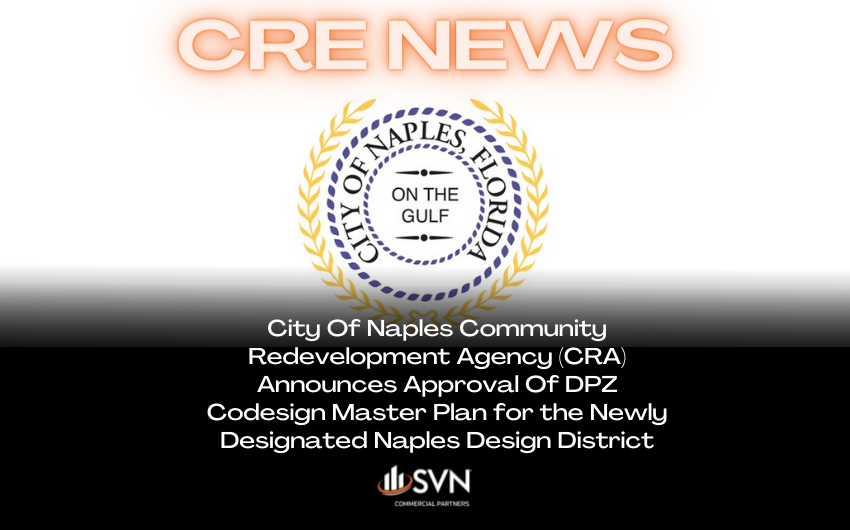 The City of Naples CRA announced the approval of the DPZ CoDESIGN Master Plan for the newly designated Naples Design District, formerly described as the 41-10 Mixed-Use Area. The Master Plan Vision sets forth actionable strategies in support of three key goals:

The Naples Design District will join 5th Avenue South and 3rd Street South as a place to live, work and enjoy – for entertainment, dining, leisure, and shopping in what is evolving into Naples’ most exciting and inclusive community.

“The Naples Design District Master Plan demonstrates the desires and intentions of Naples residents to maintain the unique, inclusive qualities of the area, while building on the assets to create another dynamic area reflective of the Naples vision,” said Anita Jenkins, CRA Administrator.

Initiated by the CRA in response to substantial new investment in the area known for its concentration of art and décor businesses between US-41 and 10th Street, the Master Plan is a culmination of a year-long process that kicked off on September 10, 2021 with the creation of the Speak Up Naples platform. The site was designed to inform the Naples community about the process, give stakeholders a forum in which to share their ideas and voice concerns, and to grant an opportunity for all area residents to post comments reflecting their concerns and desires for the evolution of this District.

Vice Mayor Mike McCabe, CRA Chair said “The Naples Design District is an exciting, eclectic area that has so much potential.  It will evolve into the next place to be.  The Master Plan developed by DPZ CoDESIGN is the foundation for all that will come.  Here’s to the next jewel of the City of Naples.”

The Master Plan seeks to leverage existing assets by amplifying infrastructure that currently defines the Naples Design District’s success, such as enhancing the unique alleyway system with the Design Walk, a picturesque and active promenade to complement the art, design, and dining scene already in progress.  Also underway are plans to refine the District’s infrastructure and to improve connectivity to destinations beyond the Naples Design District.

“The Community Redevelopment Agency Board’s acceptance of the final Naples Design District Master Plan is the culmination of the community’s commitment to a viable plan, befitting of the City of Naples, that will enhance the district and position it for the next generation,” said newly appointed City Manager, Jay Boodheshwar.

The CRA will meet in September to evaluate capital improvements and a three to five-year implementation plan.